Roomy Khan lived in the affluent Atherton neighborhood of Silicon Valley where the roads are paved with gold and diamonds shimmer on stalks. Their red Bentley matched the titanium watch she bought her husband. Friends called her a day trader. She made a lot of money on Wall Street as a stock market analyst. She scouted for insider information that did not match Wall Street predictions, trading tips which she shared with her former employer, Raj Rajaratnam, co-founder of Galleon Group, one of the largest hedge funds in the world. By 1999, she had made $50 million.

Then one day in 2008 the Feds at her door knocked the breath out of her. The tide turned and she was swept under, left gasping for breath. Roomy had sent an errant text and now she had no choice but to cooperate. She became a government informant.The FBI wanted Rajaratnam, and she would help them get him. Rajaratnam once said an astrologer had warned him that a girl with a mole would be his downfall.

In October 2009 he was arrested and is now serving his seven-year sentence in jail. Roomy Khan got one year. You can hear her story including the moment when she was caught here on 60 Minutes.

zUncategorized Coach Parents and the Kids Will Thrive

Bake ‘n bond in the summer

My initiation into baking was in the 70s, growing up in India. There were no electric or gas ovens and my mom made butter biscuits on a stove top. She used a he

Transgender people, often spotted at weddings and births, have always held a distinctive place in Indian culture. Considered special, their blessings are sort a 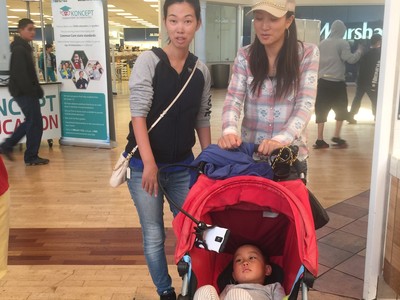 Coach Parents and the Kids Will Thrive

The awe-inspiring views of New York City were stunning from every angle on that clear, clear day of blue skies and glittering buildings. I observed a fam