Kale, an extremely nutritious leafy green vegetable, is a part of the cabbage family. The impressive profile of kale lists many important nutrients.  One cup of cooked kale contains over 300% Recommended Daily Allowance (RDA) of vitamin A, almost 100% RDA of vitamin C, and over 1000% RDA of vitamin K, also 10% RDA of calcium, and 6% RDA of iron. Unlike spinach, kale is low in oxalates, so the calcium and iron in kale is easier to assimilate. One cup of cooked kale has only 40 calories, but offers three grams of protein.

Several varieties of kale are available in the market. The most common are curly green kale and dark green dino kale.  Kale can be eaten raw in a salad, or you can stir-fry it quickly described below. Here are three recipes for kale, one simple and two more elaborate.

Shanta Nimbark Sacharoff, author of Flavors Of India: Vegetarian Indian Cuisine is a co-owner of Other Avenues Food Cooperative in San Francisco. Serena Sacharoff is a chef, an illustrator and an art student.

Method
Heat the oil in a frying pan and add the garlic. Saute for 2 minutes. Add cumin seeds. After another minute or two add the kale, and stir-fry the mixture for five minutes or until the leaves are wilted. Add the salt and lemon or lime juice, toss, and serve.
Variation: Pan fry a cup of small paneer, tofu or boiled potato cubes in a teaspoon of oil and add to kale after it has been wilted.

Method
Preheat the oven to 350 degrees.

Prepare the kale as follows: remove any thick central stems and discard. Wash the leaves thoroughly and drain them well. Spread the leaves in a single layer on a cloth or paper towel, and roll the kale in the towel gently to absorb as much of the moisture as possible.

Lay the leaves flat on a cutting board and rub them gently on both sides with a small amount of oil. Sprinkle a bit of salt on one side, and lay the leaves in a single layer on a lightly-oiled cookie sheet (or two). Bake the leaves for 10 minutes. If done, they will be crisp, like cooked papadam. If the leaves are still limp, bake them for another 2 minutes, watching carefully so they don’t burn. Using tongs, flip the leaves, and bake them for another minute or two, watching carefully. Transfer the hot chips to a platter and serve hot or cold as a  snack or as an appetizer.

Kale Pakora
This recipe was inspired by an appetizer I had at the Vermilion Restaurant in Manhattan last winter. I had ordered “kale salad,” expecting a bowl of chopped kale with dressing. Instead, I was pleasantly surprised with hot kale fritters like pakoras, while it was freezing cold outside!

Ingredients
8 to 10 large green, curly, or dino kale leaves
1 cup of garbanzo or chick-pea flour
(also known as besan in Indian markets)
3 cloves of garlic, peeled and  minced
¼ tsp each ground cumin and ground coriander
a few pinches of ground cayenne pepper to taste
½ tsp (or to taste) salt
juice of ½ lemon or lime
approximately ¾ cup or more water
2 cups light oil such as canola, peanut or sunflower seed oil

Method
Wash, rinse and dry the kale thoroughly as described in the recipe for Kale Chips.  Cut kale into smaller pieces and lay them on a platter. In a mixing bowl, combine the garbanzo flour, spices, salt and lemon juice. Add water as needed to make a batter that is similar to pancake batter.

Heat the oil in a wok or a heavy frying pan until it is very hot. Check that the oil is hot enough by dropping a small piece of batter into the oil. If the piece bubbles and rises to the surface right away the oil is ready.

Dip two pieces of kale into the bowl and cover them with batter, leaving some parts of the leaves uncovered. This will give the finished pakora a light, tempura-like texture much different than traditional pakoras.

Carefully, slide two or three of the dough-covered kale pieces into the hot oil. Keep your distance from the hot oil as it may splatter due to moisture in the leaves. When the kale pieces are crisp and light brown, turn them quickly using a tong and cook them briefly on the other side. Remove them from the oil and lay them on a platter lined with paper towels. Repeat the process in small batches until all of the leaves are cooked. Arrange them on a platter in a single layer to keep them crisp. Serve hot or at room temperature with mint chutney.

Method
Place the ingredients in the jar of a food processor or blender and puree until smooth.  Keep it chilled until ready to use.  If refrigerated in a covered jar, the chutney will keep for a week.

Article was first published in August of 2015. 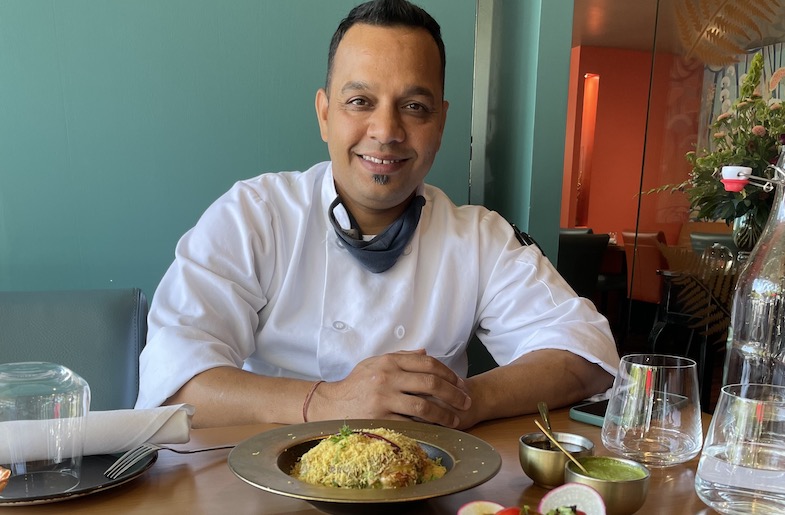