Hindustani musicians often speak of dhrupad the same way that jazz musicians speak of the blues: It is the root, the source from which their music springs, and to which each musician must return to continually recharge and revitalize. But while blues is an unabashedly popular form of music, dhrupad came from sources that were not even music at all, if we think of music as being something performed for audiences at a concert.

Dhrupad is probably closer to the chanting of Hindu priests than any other form of Hindustani music, and such chanting is primarily a tool for reaching enlightenment, rather than an art form. Unfortunately, this closeness to spiritual practice has prompted many people to think of dhrupad as a kind of musical “spinach” i.e. something that you should listen to because it’s good for you, not because it’s aesthetically pleasing. Consequently, many Indian music stores with substantial selections of khayal and other Hindustani classical music will carry little or no dhrupad recordings. Even devotees of classical music often seem to think that listening to dhrupad will be about as exciting as watching the grass grow.

Thanks in part to the efforts of the International Association for Human Values (IAHV), the three Gundecha Brothers (vocalists Umakant and Ramakant, accompanied by Akhilesh on pakhawaj) are helping to dispel this myth. They performed two benefit concerts this year for IAHV’s 5H program, which provides education, medicine and nutrition for poor people in Bihar and Uttar Pradesh. And although those who came may have thought their primary motivation was to help a good cause, they experienced an evening of music that was not only spiritual, but beautiful and artistically sophisticated as well. Dhrupad, after all, has been concert music since Mia Tansen sang it for the emperor Akbar. And the similarities to more modern forms of Hindustani music are more noticeable than the similarities.

The first most obvious difference is the formal structure. Almost all of the improvisation takes place during what dhrupad performers call the alap. Dhrupad alap however, actually corresponds to what Hindustani instrumentalists call the alap, jhor and jhala, for it consists of slow medium and fast sections (called, vilambit, madhya, and drut, just as they are in instrumental music). The percussionist plays an older two-sided drum called the pakhawaj, which has its pitched sound ringing on a note much deeper than the “ta” of the modern tabla. When the vocalists sing with the pakhawaj, they begin with a fixed composition that usually uses a text by a traditional poet such as Tulsidas or Kabir. They then improvise entirely in Bol-baant i.e. singing variations in which the words of the poem are repeated and varied. There is no use of the taans or sargam which are so important to khayal.

But aside from these relatively minor differences, most of what you will hear in a given dhrupad performance will be greatly similar to what you would hear in a khayal performance. Many of the ragas are the same, as are the srutis and the rhythms, and the overall experience of the concert makes one think it would be more appropriate to see dhrupad as a cousin of khayal rather than its grandfather. One could say that dhrupad is “simpler” than khyal. But this is true only in the sense that it has fewer ornaments and flourishes. In this sense, a B.B. King guitar solo is “simpler” than a Jeff Beck solo, Haydn is “simpler” than Beethoven, and the Parthenon is “simpler” than a Gothic cathedral. But simplicity in none of these cases implies lack of sophistication or artistry. It merely means that the artistry is focused on broad lines rather than on filigrees and curlicues.

When the Gundecha brothers sing an alap, there are fewer shakes and quivers than you will hear in khayal. But they do use slow subtle shifts in sruti which require tremendous vocal power. The great khayal vocalist Ustad Nisar Hussain Khan said of dhrupad that “the long gliding phrases require very deep and sustained breath. I readily admit that I would not be able to become professional in that style.” Dhrupad also requires a very large pitch range (two and a half octaves, going all the way down to a low sa), extensive use of volume dynamics and tone quality shifts, and as sophisticated a knowledge of layakiri (rhythmic variations) as any other form of Indian music.

It is widely asserted that Dhrupad has not changed for centuries, but strictly speaking this not true. Dhrupad jugalbandi (two vocalists singing together) did not begin until the second half of this century, and now thanks to the Gundecha brothers and their teachers the Dagar brothers, this practice is extremely common. This was a very effective innovation, for it enabled the broader lines of the dhrupad ornaments to be used in new ways without having to borrow ornaments from khayal. When the Gundecha brothers sang the pentatonic raga bhupali at their San Francisco IAHV concert, the wide intervals in the raga made it possible for their vocals to freely swell and slide against each other, creating a languid counterpoint that almost sounded like widely spaced harmonies. And during the drut alap, their staccato recitations of quick syllables created bubbling cross rhythms that could exist in no other form of music.

On their new album “Dhrupad Vocal”, they also add another innovation: a rich reverberation that creates a sound more like a concert hall than the traditional small room sound used in most Indian classical recordings. Because Indian classical music today is almost always played amplified in large concert halls, this is a more accurate way of reproducing a live performance, and the resulting sense of grandeur fits the music quite well. I would have preferred to have less reverb on the pakhawaj, for this setting obscured many of the higher tones of the drums, and forced brother Akhilesh Gundecha to play with less drive and virtuosity than he used in the live concert. But there is no denying that the explosive snare-like quality produced by the reverb was extremely effective. Perhaps this pakhawaj sound will become the standard for twenty-first century dhrupad, just as jugalbandi became standard in the twentieth century. Only time will answer that question, but there is no doubt that, thanks to the Gundecha brothers, dhrupad will continue to grow and flourish.

Teed Rockwell has studied classical Indian music for fifteen years at the Ali Akbar College of Music and privately with Habib Khan and the Salamat Ali Khan family. 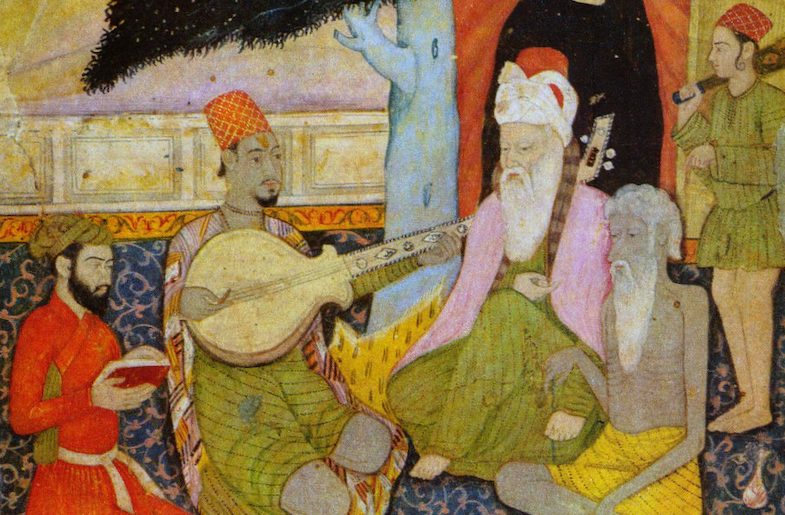