How the dominoes have fallen. Ever since producer Harvey Weinstein was exposed as a sexual predator, the list of prominent men charged with sexual harassment has grown. Some of these men, like comedian Louis C.K., and actor Kevin Spacey, have been my idols. Even NPR’s revered news department has been purged of its bad actors.

For the first time, the accusers are being believed. And liberals are finally asking, “What about Bill Clinton?”

It’s about time. People on the left defended Clinton during his impeachment on the grounds that the accusations were politically motivated. Which they were. But in the political fray, the truth got lost, namely, that Bill wielded his power to use women for sex.

What bothered me most during the Lewinsky saga was not Bill’s actions, but Hillary’s reactions. She admitted that Bill had a problem, but failed to show compassion towards any of the women. Hillary’s attitude towards the young and the naïve Monica Lewinsky remains hostile.

Hillary used the phrase “bimbo eruptions” to describe her husband’s transgressions, thus directing the blame toward his accusers. She stuck to an age-old narrative of wives and concubines. Which I could have overlooked had she not been one of the most ambitious and powerful females in the world.

Hillary can’t have it both ways. She can’t hold herself as a champion of feminism, and also say, “Don’t look at my personal life.” If the personal is political, as the feminists once preached, then Hillary’s personal life has been bewildering, particularly for women of the “third world,” who continue to suffer from the legacy of bride burnings, polygamy, shaved-head widows, female genital mutilation, and the murder of female fetuses.

As I said so passionately in my column published in the Los Angeles Times nearly twenty years ago, “the American feminist movement—which taught us about sexual liberation, birth control, domestic violence, and sexual harassment—is now teaching is to preserve our marriages even if our middle aged husbands engage in sexual liaison with women young enough to be our daughters. Moreover, the message is, we should overlook our husbands’ sexual lapses for the sake of our children.”

Reading these words today, I am moved by my younger self.

Don’t get me wrong. I am not suggesting that the Clintons should be investigated and punished, as the Republicans have suggested. Neither am I saying that Trump was a better candidate than Hillary. All I want is for Hillary to acknowledge that her choices contributed to her loss of an election that should have been a cakewalk. She needs to take some responsibility for the resulting destruction of our democracy at the hands of Trump. She needs to stop peddling her book and blaming everyone else for her failures. She needs to listen to Monica Lewinsky’s Ted Talk describing the harrowing months in 1998 during which her family would not let her go to the bathroom alone for fear that she’d commit suicide.

Why am I focusing on Hillary instead of Bill? Because I am still stinging from her election debacle, while I am more or less satisfied with her husband’s presidency.

The political left is at last abandoning its hypocrisy. Chris Hayes, the MSNBC anchor, has tweeted that we need to reckon with the accusations against Bill. Kirsten Gillibrand, Senator from New York, has said that Bill Clinton should have resigned in 1998. Matthew Yglesias of Vox has written an article saying the same thing. I suspect this revisionism is happening partly because the liberals wonder if their defense of Bill Clinton’s lapses indirectly led to the election of Donald Trump two decades later.

I am not fond of such Monday morning quarterbacking. But I want liberals to acknowledge Hillary’s role in silencing and vilifying Bill’s accusers. I want Gloria Steinem to admit that Hillary was not a paragon of feminism.

The tragedy is that one cannot criticize the Clintons without falling prey to alt-right trolls. The Republicans have proven to be hypocritical. Otherwise, they would not have elected Donald Trump as President. This is the reason why the left supported Clinton during his impeachment trial. Republicans, liberals knew, were not motivated by a search for truth or a sense of morality, but by pure partisanship.

So what now? Have we entered an era in which sexual harassment will always be taken seriously? Or will there be a backlash, as has been the case with Trump’s election, in the aftermath of which our values of decency, diversity, world leadership, inclusiveness, and tolerance are being upended?

Don’t get me wrong. I think sexual harassment needs to be prevented. I am glad that women are finally speaking out and are being believed. But I worry about the current hysteria and the resulting tendency of the liberals to jump on the bandwagon.

Instead of asking for the head of Al Franken or the retroactive resignation of Bill Clinton, the liberals need to teach women to shed their fears. We need to demand that men treat women with respect. We need to abandon our double standards, one for the rich and powerful, and another for the rest of us. We need to prevent a Donald Trump from ever coming to power again.

Last Word Is Identity Politics Passe in the Age of Globalization?

Last Word Is The Handmaid’s Tale a Feminist Tract?

Is Identity Politics Passe in the Age of Globalization?

After spending a month in Catalonia, I returned to California in September even as the referendum took place there. Looking back, I marvel at my naiveté as I s 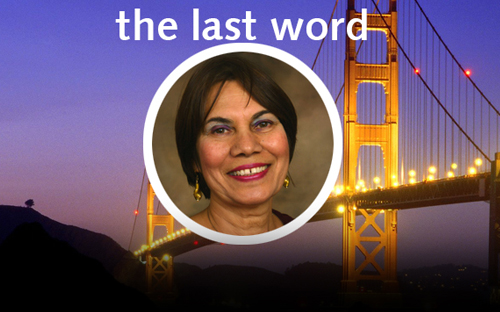 Is The Handmaid’s Tale a Feminist Tract?

I have always had difficulty with Margaret Atwood’s writings, perhaps because her visions of the future are too dark. Listening to the audio version of The Bl