Nearly 2000 miles north of Sri Lanka the first stone structure being built in India featured a lady from Lanka, a Yakshi swung from the gate. The Stupa at Sanchi was commissioned by the emperor Ashoka in the 3rd century BCE .

The yakshi has a bare torso with a single pearl falling between her breasts. A girdle holds up a diaphanous lower garment across her broad hips. She wears heavy anklets and bracelets, and her hair is tied into elaborate plaits. She is holding up the sandstone beam that was once across Sanchi Stupa’s gateway. The British museum, that now houses the statue, continues that as per an ancient Indian fertility rite, beautiful young maidens were said to usher in spring by kicking a tree trunk while breaking off a branch, so as to arouse it into blossoming. Or as the Boston Globe puts it, “the touch of a woman, according to Indian myth, could cause the sap of the tree to run, making it flower and bear fruit”.

In India’s epic Mahabharat, written in the post Ashoka period the poet calls out to the Sri Lankan lady

Who art thou that,
Bending down the branch of the Kadamba tree,
Shiniest lonely in hermitage,
Sparkling like a flame of fire at night
Shaken by the breeze,
Oh thou of fair brows?
Exceedingly fair art thou
Yet fearest nought here in the forest
Art thou a devata, a yakshi, a danavi, an apsara,
Or a fair daitaya girl, or a lovely maiden of
the Naga king
Or a night wanderer (rakshasi) in the woods?

The Ramayana penned during the same period tells the tale of Sarupnakha who incited her brother the well endowed powerful King Ravana to avenge her insult.

As I wander around Anuradhapura, Sri Lanka’s first capital city, there is no sign of the epic stories. Buddhism, the religion that predated the written versions of both the epics Ramayana and Mahabharata; and the stone stupas, however is everywhere.

Towering stupas dating back to 3rd century BC and 1st Century BC dominate the landscape. The mahabodhi tree, an imported and re-planted branch of the tree under which Buddha had attained enlightenment holds pride of place. Planted in 288 BC, it is the oldest living human-planted tree in the world. Seeds from the Bodhi tree were disseminated throughout Lanka where they have taken root.

Four ancient tribes inhabited Lanka about twenty five centuries ago: the Raksha, the Yakshi, the Deva and the Nagas. Stories some of beauty and some of terror carried to the neighbouring country of India.

Meanwhile in Sri Lanka theravada buddhism took root. Over 70 percent of the population are Sinhala buddhists. The possession of Buddha’s tooth, a relic carried from India, is protected with life as it bestows the divine right to rule on its possessor. In 1998 the LTTE, a militant Tamil organization tried to capture it in vain. It resides in a temple in Kandy.

Two hours drive south of Anuradhapura, Sigriya Fort a massive column of rock nearly 200 metres high has been a buddhist monastery from as early as the 3rd century BCE. We scrambled up all 1200 steps to see a fabulous view of a forest carpeted earth. Lion claws carved into the rock announce the start of an ancient citadel built by King Kashyapa during the 5th century.

In Colombo, another two hour south of Sigriya, the eclectic Gangaramaya Temple houses what the priest claimed was Buddha’s hair and the Bodhi tree..

Meanwhile the Yakshi continues to have fascinate the people of India. The Lady from Lanka now also stands at the entrance of the Reserve Bank of India building in New Delhi an imposing twenty-one-feet high statue she holds a bag of money in her hand. The statue was completed in 1967. She guards modern India’s material needs.

We flew into Colombo from the United States where we visited the Gangaramaya Temple, had lunch at Mount Lavinia Hotel and shopped at Barefoot and Odel. A day trip to Galle Fort, two hours south of Colombo by car was a foray into the island’s European past. Next day we drove four hours to Dambulla where we stayed at the Heritance Kandalama. The resort is cut into the mountainside by Sri Lanka’s premier architect Geoffrey Bawa. Overlooking the Kandalama Lake and the Sigiriya Rock Fortress the resort is highly recommended. We visited Anuradhapura and Poḷonnaruwa the two ancient capitals as day trips from Dambulla before returning to Colombo.

Ritu Marwah is the Features Editor for India Currents and a history buff. 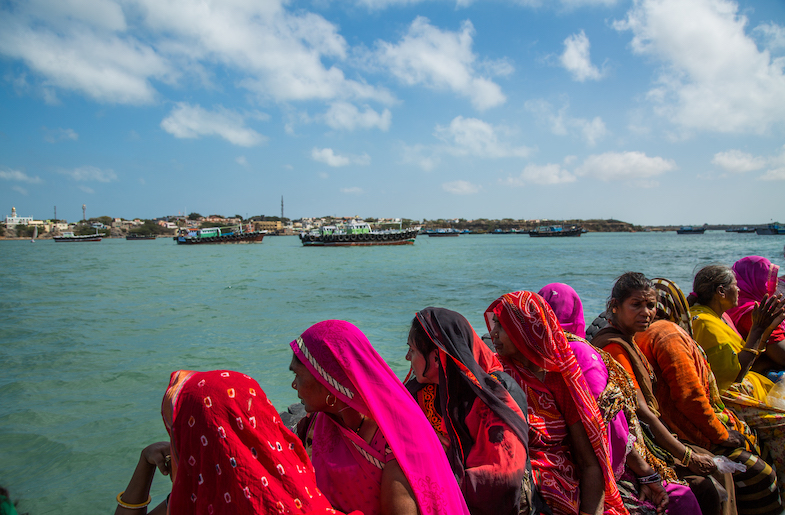