Senior citizens have always been a very reliable voting bloc in the United States.  We assume that this is because they have the time to go vote.  While that might be somewhat true, the fact is that retired people are most vulnerable to any policy changes made by the government.  When Social Security constitutes a sizable part of your income and Medicare is your only option for health care, voting is much more than just your civic duty – it becomes the most important thing you must do to maintain your quality of life.

Just like all older voters, older Asian Voters are more likely to be registered and to vote. They reliably show up to the polls to vote in larger numbers than their younger brethren.  Infact, in presidential elections, voter turnout is even higher for foreign born Asians than those that are U.S. born.

According to the National Survey of Older Voters During COVID-19: Asian Americans, conducted by the Harris Poll on behalf of AARP, although 86% are “very likely” to vote in 2020, the majority of Asian American voters 50+ are not being engaged or contacted by either party affiliation (61%) or community organizations (74%), according to (AAVS). 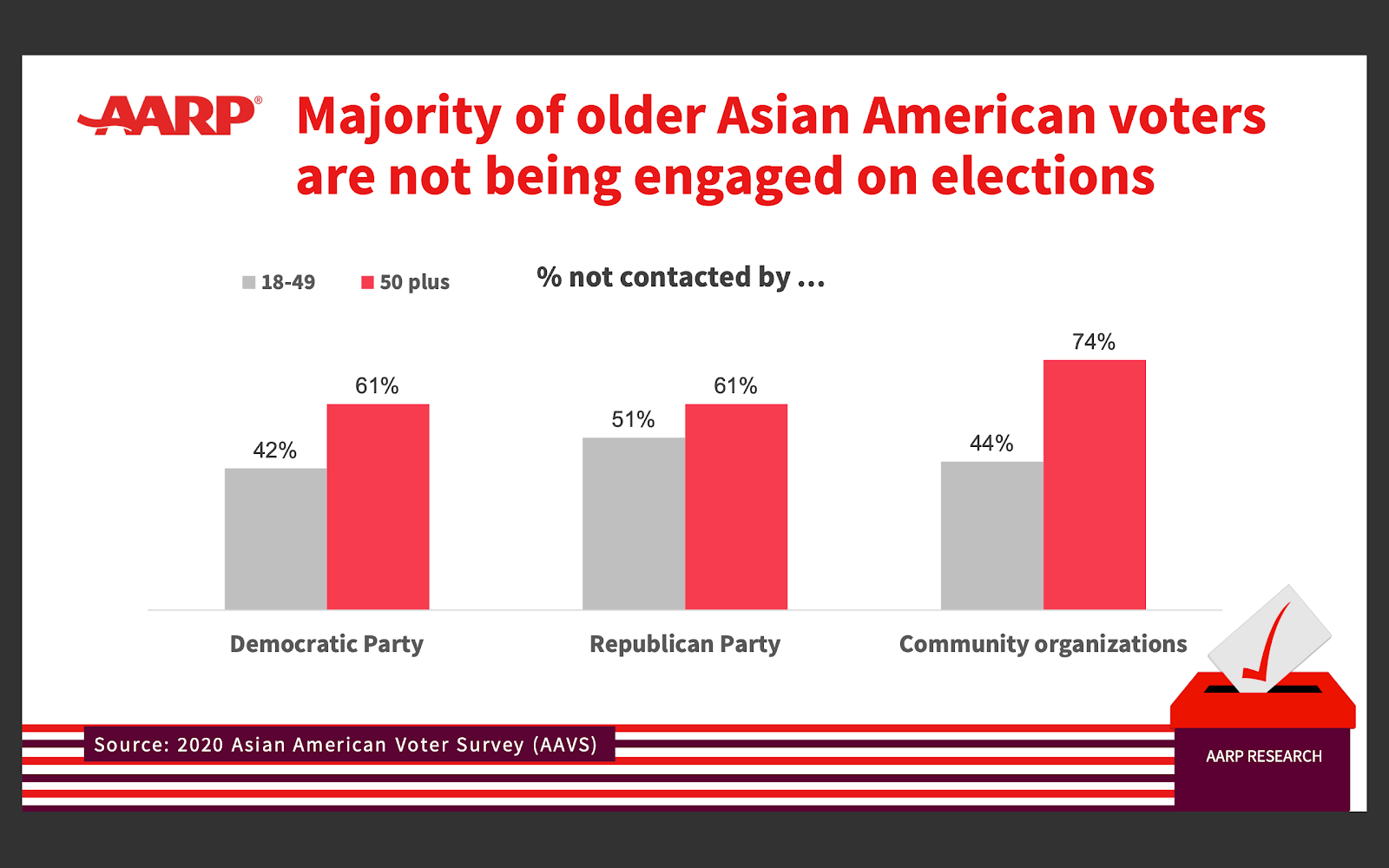 This data is so puzzling but what does this mean and how does this impact this large voting bloc?  It means that this group is invisible.

When you think of a Asian American voter, your mind immediately conjures up a 30 something year old, highly educated person with a good paycheck; painting a picture of a young, educated, middle class person.  This image belies the fact that many of these voters are senior citizens or at least 50+ and this is the demographic that AARP  (American Association of Retired Persons) is interested in.

Turning 50 is life changing in many ways, but the significance of that particular number becomes even more acute when you receive your welcome package from AARP.  I am not old and I am certainly not retiring anytime soon you think and you are right.  But AARP is not just for old, retired people.

AARP is working to have your (50+)  voice heard on the issues that matter to this demographic.  Protecting social security and medicare, lowering prices of prescription drugs, and ensuring your right to vote safely among many other issues. While these might not be issues that are top of mind for you at 50, you know it will be very soon. 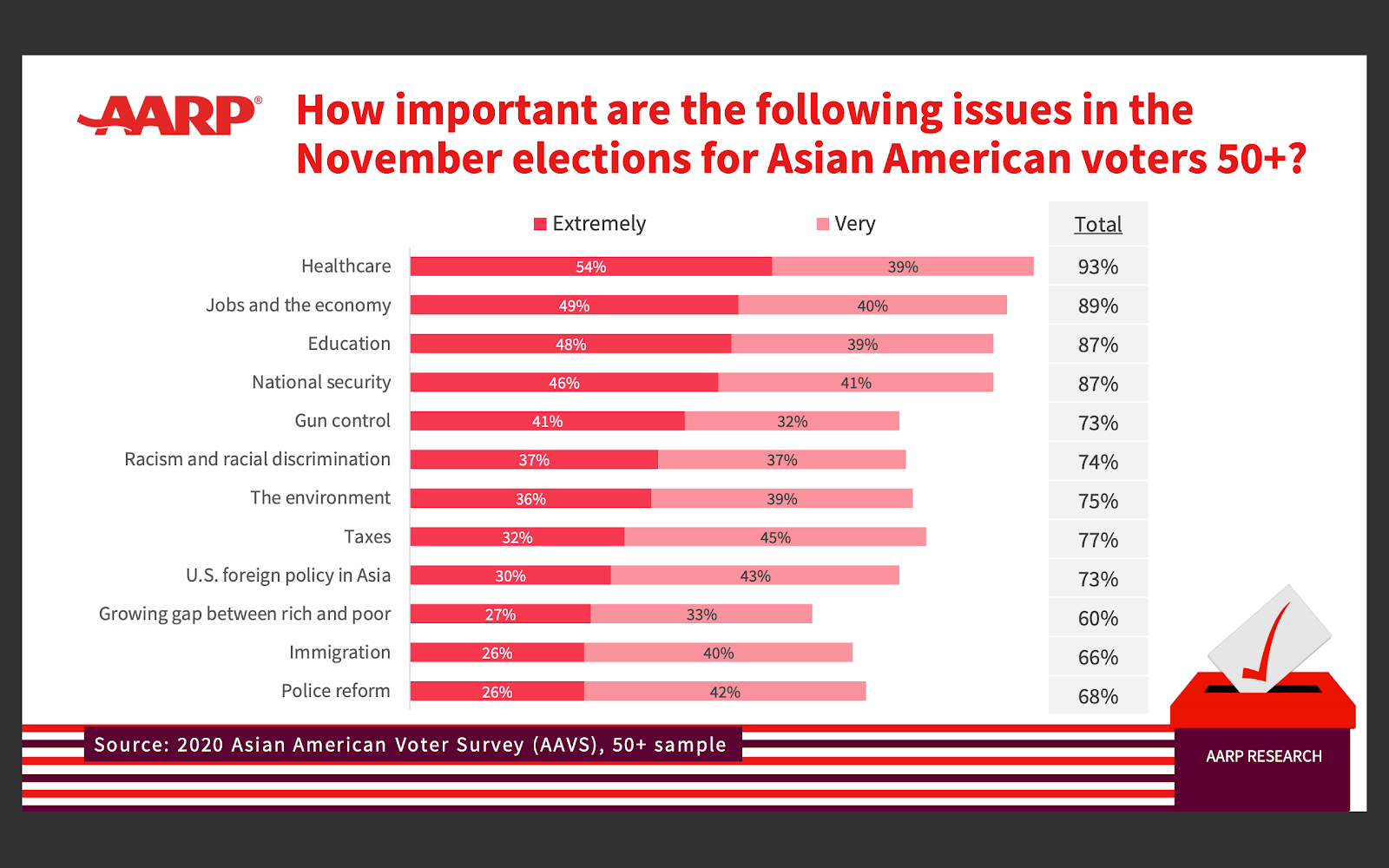 With over 50k+ nursing home deaths and the disproportionate vulnerability of our elders to the current pandemic, these survey results are not surprising. COVID-19 has underscored the importance of healthcare as a voter issue and has caused a sense of insecurity related to the economy, health, freedom from discrimination, elections and voting.

Additional findings from the survey on 50+ AAPI (Asian American & Pacific Islander)  – which is the category under which South Asians voters are aggregated include:

If the 50+ Asian voter is so engaged and likely to vote, why are they not on the radar for either party?

One piece of data that is striking is this :  85% of 50+ Asian American voters are foreign born. One reason for this opportunity gap is the need to reach out in different languages in order to communicate effectively with this community.

But the larger reason for this lack of engagement is education about the numbers and their impact.  “They don’t pay attention if there is no data,” says Daphne Kwok of AARP.  “But now we are proving that this cohort is an important part of the electorate.  For the political parties, it is so key that they start to hear from AAPI 50+” continues Kwok.  Our issues and concerns have to be raised and addressed.

“We have seen over the past election cycles, more and more AAPIs getting involved politically, voting, and hopefully our voice is starting to become louder.”  Kwok is also optimistic because it has also been proven in the last election that AAPIs have become the margin of victory in many races. Hopefully this is the incentive both parties see to reach out to this voting bloc that could make a difference for their candidate.

So let’s get out the Vote in our 50+ community.  Each state has different rules, different timelines, and different procedures.

Everything you need to know to vote safely is at aarp.org/election2020  and APIAvote.org.

Older voters are more likely to vote in person.  If there is a vulnerable senior citizen in your family, please take the proper precautions but help them make their vote count.