Poetry As Sanctuary – A column where we explore poetry as a means of expression for voices of the South Asian Diaspora.

For five years now, I have hosted monthly poetry readings in my living room, which, starting in March 2020, with the onset of the pandemic, transitioned to weekly online meetings by popular request. It has proven to be a sanctuary for us regulars. We read poems in different languages, with impromptu translations, to find shelter in poems. We have read poems to process the major public tragedies in these unusual times, be it the pandemic, the murder of George Floyd and protests in its aftermath, California’s largest wildfires with darkness at noon over San Francisco and ash raining down from the skies, India’s major floods and the largest migration of daily workers who walked from all major Indian cities to their villages, the very divisive presidential election with the prolonged wait for the results, to the history-making Biden-Harris team winning the White House from Trump, and beyond. Thanks to the patient listening and open minds, we have grown closer and our personal experiences are also shared through the poems we read.

In July 2020, I suffered a personal tragedy, as my mother passed away in India. As an only child, it was especially hard to not be near her as she bid farewell to this life. The strong independent woman she was, she had made plans for her mortal remains to be donated to the local hospital for the cause of science. Due to COVID restrictions, the hospitals were no longer accepting cadavers. My maasi’s daughter and her son, and their spouses, took care of the last rites. My grief was expressed in the poetry circle as I sang an old Sindhi prayer that I first heard as a child from my grandmother. It is an aarti, sung at the end of most prayer rituals in Sindhi households. We call it pallo as we sing it while holding open a scarf or end of a saree or hands open in front of the body, in supplication. The ‘pallo’ starts with…

I am seeking at Zinda-Pir

My boat is mid-stream

I am seeking at Zinda-Pir

Wishing for my wishes at Zinda-Pir

Many come seeking at your door

For your blessings, the rich and the poor

Sindhi is spoken mostly by Sindhis living in Sindh, Pakistan. The majority of them are Muslims as the Hindu Sindhis, like all four of my grandparents, migrated to India in 1947, due to the partition of the country. My parents were about ten years old as they became child refugees in India. Their generation assimilated by adopting the local languages and customs, and by inter-marrying people of different faiths and languages. The partition destroyed the rich cultural and literary heritage of Sindhis as we became displaced people. My mother was the only person I could speak in Sindhi with. With her passing the reality of Sindhi as a dying language hits home personally. Most of my cousins can’t even speak it, and I never learned to read or write it. It is written in the Arabic script and growing up in Delhi, there was no access to learning it in school or elsewhere.

As I sang the pallo, one of the poets in our circle, who reads extensively in Urdu, another language written in Arabic script, told me about Shah Latif, the best-known poet of Sindh. A classic book of his poems, Latif-jo-Rassolo, was published in 1866, almost 100 years after he passed away. With curiosity aroused and information a few clicks away, I discovered so much about the land of my ancestors and Sindhi culture that I might never have otherwise.

For example, I always knew that we Sindhis worship Jhulelal, the river god, who is depicted sitting on a fish. That seemed fitting for a people named after the river Sindhu, called Indus in English, that flows through Sindh. Sindhis have been global traders from the times when rivers were the highways and boats were planes. The typical Sindhi greeting ‘bedo paar’ literally means ‘may your boat land safely’.

What I never knew was that Jhulelal is a poet who lived in the mid-tenth century. He is called by many other names, such as Lal Sai (because he wore red robes), Odero Lal (Flying one, as he traveled a lot), Zinda-Pir (Living Saint), Sheikh Tahir, Shahbaz Kalandar, amongst them. He is part of the rich Sufi tradition, that originated in Sindh. The richness of the culture is hinted at in the fact that India is named after a bastardization of Indus, the land of the ancient Indus Valley civilization.

One of the major archeological sites of that ancient civilization, called Mohan-jo-Daro, is simply Sindhi for Mound-of-the-Dead. The locals knew of it always, way before the British engineers trying to lay the railroad through the soft sand of Sindh were led to it, to steal and reuse the 5000+ year old bricks from the Great Wall of Sindh, to stabilize the sand for 90 miles of railroad tracks to be laid on it. To this day, the shrine of Odero Lal in Sindh is one of the few places where Hindus and Muslims continue to pray together under the same roof.

I have sung the pallo many times in my life, but only now deciphered the coded message in it. Today Zinda-Pir would be considered a Muslim name and Odero-Lal a Hindu name, but in the song, we seek blessings from the same poet, best known as Jhulelal, the Sindhi God. The most popular song that every qwaali concert ends with, when everyone dances, is an ode to Jhulelal, Dum-a-dum Mast Qalandar, made popular in the 70s by Bangladeshi singer Runa Laila, but also sung by Abida Parveen, Nusrat Fateh Ali Khan, Rahat Fateh Ali Khan, Fareed Ayaz, and many others that continues to build bridges of love as iconic singers from Bangladesh, Pakistan and India continue to sing it to appreciative audiences. Breathing life into poetry by reading it out loud to patient listeners revives this almost-extinct message of love, much needed in these troubled times.

Dr. Jyoti Bachani is a poetry-loving business professor as sanctuary is a monthly column curated by me, written by different poets and poetry lovers who meet weekly to read poems to each other in a group that organizes itself using the Facebook page Poetry of Diaspora in Silicon Valley group. 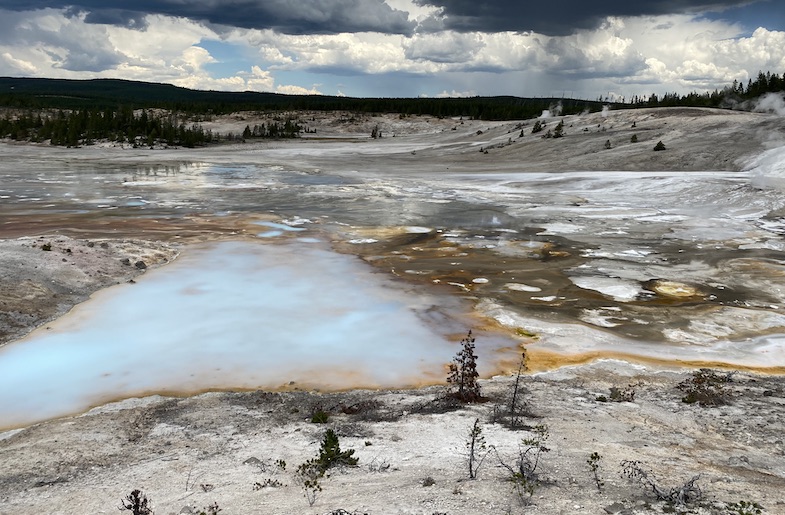