My aunt passed away recently. She was 88 years old. She was born at a time when India was gestating her freedom from British occupation and Pakistan was not yet a fetus. My aunt arrived into a world of Hitler, Stalin, Tamaka Giichi, Ramsay MacDonald, Kemal Ataturk and Calvin Coolidge. She left a world of Angela Merkel, Putin, Shinzo Abe, Theresa May, Recep Erdogan and Donald Trump.

On hearing the news of her death, I felt an incredible sense of loss, and it was more than the loss of a life that I had known and loved. I was also assailed by a feeling of anxiety that I couldn’t quite pin down.

In his recent syndicated column titled, “What It Means When a Generation Dies,” Miami Herald columnist Leonard Pitts describes losing a community’s first-hand memory when a generation disappears and we become the “grown-up” generation. “But those of us who are of a certain age and also African American are losing those things, and other things specific to us.”
I am now of that age when, like Pitts, my aunts and uncles are leaving me behind. And I, too, feel a sense of personal as well as a specific cultural loss. I fear I may not be able to speak lucidly of the ideas, places, people and situations that I grew up listening to and experiencing.

I feel a sense of personal as well as a specific cultural loss. I fear I may not be able to speak lucidly of the ideas, places, people and situations that I grew up listening to and experiencing.

For one, I worry that I have begun to forget the little details of the stories I knew. So, I asked my mother to tell me once again what she remembered of my aunt, her older sister. My mother’s cloudy eyes brightened. “Akka got married when she was sixteen,” my mother started. “It’s unheard of today, isn’t it? Theirs was a love marriage too,” she remarked. My grandfather, it turns out, took a job as a math teacher in Thalavady village of Alappuzha district in Kerala. He rented a unit that was perpendicular to the school headmaster’s own house and my grandfather moved his family there. Then one day, the headmaster’s son, who was working in Dalmia, Bihar as an engineer at the time, came home and caught sight of my beautiful aunt. There was an instant connection, which was hastily and skillfully managed. “Their horoscopes were found to match and they were married,” my mother related as her face reflected the emotions she had once experienced at the quickly unfolding “forbidden” romance between her sixteen-year-old sister and brother-in-law.

Those were my mother’s reminiscences, but for me, my primary memory of my aunt Subbulakshmi is of a woman of uncommon kindness. My earliest memory of her was when my parents were dropping me off at boarding school in Ranchi when I was four years old. Before heading to my school, we stopped at my aunt’s place. I remember her face looking down at me tenderly, even sorrowfully. As late as December of last year, she eagerly welcomed me into her son’s house with that same expression of tenderness that I remembered so well.

Every generation’s memories are distinctive. My mother remembers her sister as a young girl, I remember my aunt as an affectionate and benevolent mother figure. And the way we reminisce and recall our pasts plays a role in our social and cultural history. Pitt describes this connection to history eloquently. “Firsthand memory of the Depression, the war, the Holocaust, is dwindling at a sobering pace, disappearing one heart attack, cancer diagnosis and stroke at a time.”

For immigrants, autobiographical memory is further complicated by displacement to foreign countries and cultures. Our migrations add distance and distortion to our recollections. So not merely would we not be able to recount first-hand details of the Partition, Bengal Famine and Independence, but neither will we be able to convey a particular geographical intimacy when we narrate stories about Thalavady village of Alappuzha district in Kerala as our own childhood memories begin to fade.

Maurice Halbwachs, the French philosopher and sociologist tells the tale of a young boy, nine or ten years old, found in the woods of Chalon in 1731, who described twice crossing great distances by sea and evinced deep emotion when he was shown pictures of Eskimo boats and huts when he was first discovered. “What will this child be able to retain” asks Halbwachs, “if he is abruptly separated from his family, transported to a country where his language is not spoken, where neither the appearance of people and places, nor their customs resemble in any way that which was familiar to him up to this point?”
The romance of an old-world village in India will probably sound exotic to our children who’ve grown up knowing American cities and suburbs. How will succeeding generations conjure up the vibrant imagery of neighborhood women parlaying family politics as they synchronize the circular movement of their stone dosa grinders?  How can our descendants reconcile the “forbidden” nature of a love story set in India in 1945?

But perhaps it’s not all lost. Perhaps looking back to the past with a contemporary lens has its own charm. As Halbwachs explains, “Our greatest number of memories comes back to us when our parents, our friends, or other persons recall them to us.” The key is to listen for and excavate the stories we own and, more importantly, to keep telling the stories we know. 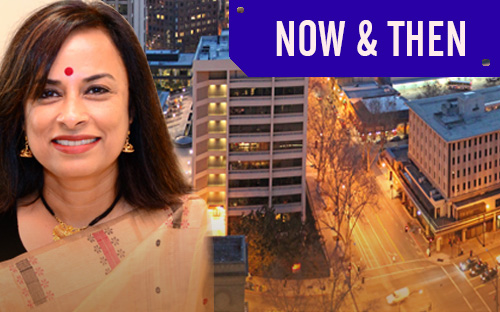