Tell A Story – a column where riveting South Asian stories are presented like never before through unique video storytelling.

As another election season comes to an end in India, it leaves us with lingering doubts – introspection into what could have been avoided and needs to be mended. Aggressive campaigning amidst pandemic led to a rocketing spike of cases, an unexpected setback for the central ruling party.

But the fundamental and crucial issue that remains unnoticed is the staggering ratio between the number of male contenders to female contenders in the election. Have you ever pondered on the count? Well, it’s shocking to note that the count not even close!

This is an issue that is very much prevalent across the globe. In America, we saw the first woman win the vice-presidential election campaign only in the recent 2020 election. Prior to Kamala Harris, the first female, first African-American, and first Asian-American vice president, only five women throughout history had made it to a major party’s primary debate stage.

According to the UN Gender statistics 2020, globally, only a quarter of seats in national parliaments are held by women. In local deliberative bodies, the count is hardly 37 percent. When it comes to the world’s government heads, only 6.7 percent are women. With the current rate of progress, the UN believes global gender parity can be achieved only after 2060. And even that looks dicey with the number of gender discrimination cases rising across the world.

Not just for women to come to the fore and hold the reigns of power, the journey of disparity goes a long way back, right from the procurement of the basic right to vote in elections. The odyssey of women’s suffrage is unimaginable considering the outrageous reasons cited for denying voting rights to women. Absurd denial reasons included women’s incompetence to understand politics and how they would neglect home and wreck families if allowed to venture into politics.

It took more than 75 years of struggle, protests, and agony for women to obtain their basic right to vote. However, it’s surprising to observe the superpowers of today were not among the first on the list to embrace the change. New Zealand was the first country in the world to proclaim the right of women to vote in 1893. Followed by Australia, Finland, and Norway. It took yet another seven years for 28 other countries to join the wagon including the U.S, Germany, Canada, Britain, and many other European countries. For Asian countries, they had to wait until the end of World War II.

Unknown to many, few conservative nations withheld the rights until the start of the Twenty-First Century. Oman approved the rights in 1994 and UAE only in 2006. Saudi Arabia became the most recent country to grant women voting rights in 2015. Currently, Vatican City is the only country in the world to deny voting rights based on sex.

2021 saw a welcoming dawn with Estonia, a country in Northern Europe, becoming the only country to have both a female president and prime minister. But still, the women leaders who have emerged from the shackles of patriarchy are only a handful, while many others are only in the game to honor family names or to be mere puppets in the hands of male supremacy.

Through this video story, Tell-A-Story unfolds the historical women’s suffrage movement, the journey of the incredible women in power, current staggering gender economics and the need for miles to go, and millions to empower for a gender-neutral world!

Suchithra Pillai comes with over 15 years of experience in the field of journalism, exploring and writing about people, issues, and community stories for many leading media publications in India and the United States.

Profiles, Tell A Story How Satyajit Ray Influenced E.T.: Remembering the Legend on His 100th Birthday 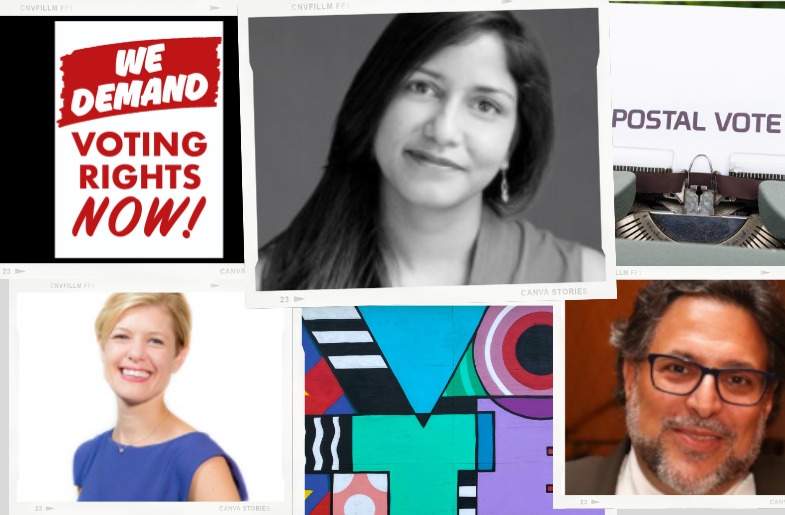 Is Your Right To Vote Safe? No, Says Voting Rights Advocate Elizabeth Hira

On June 22, the voting rights bill For the People Act (S1) (also known as H.R.1),  met a solid Republican wall of opposition in the Senate even though the bil

On April 9, The Supreme Court ruled in favor of Ritesh Tandon et. al., plaintiffs in a lawsuit against the restrictions imposed by Governor Gavin Newsom on the