Mandirs (temples) within the home have always been interesting to me. These tangible settings can provide glimpses into our spiritual and meditative aspects and aspirations. Hallway and bedroom closets, entertainment centers, small cupboards, and entire rooms—mandirs in the home are wide-ranging.

While the token mandir can’t equal a custom-built marble alcove temple that would meet the regulations of any vastu shastra officer, I haven’t seen many.

I have a good friend, who would be considered devout by any standard, and whose 6-year-old son has a handful of shlokas memorized. This friend maintains her mandir in her kitchen pantry—her murtis are on a straw thali, which is balanced on a bag of rice.

In my childhood home, my parents did not have a permanently set up mandir, partially due to their Sikh leanings and style of worship. When my parents prayed, they would simply recite their paath or prayer verses, no matter the setting. They kept our prayer books and the Guru Granth Sahib, which is accorded the same respect as an installed idol, on a closet shelf. On special occasions, such as birthdays or Diwali, we would set up pictures of Hindu deities and Sikh gurus and light incense on my dresser. My bedroom would be transformed into a mystical, magical sanctuary.

As I grew older, I wanted such a sanctuary available to our family all the time. During my teenage years, I made various efforts to have a dedicated space for a mandir. One setup was in our basement; I taped calendar picture cutouts along one corner that my father cordoned off for me with wood trim. A sanctuary can be elusive.

My first grown-up effort, in my 20s when I lived by myself, was similarly well-intentioned but haphazard. I had another batch of calendar pictures posted in separate areas throughout my apartment. I also had an idol on my nightstand; another by my TV … no designated spot within my apartment was for my mandir. “My entire home is my temple!” I remember thinking. My approach to maintaining a mandir didn’t change much after marriage. Our loft-style apartment did not seem conducive to establish a dedicated space.

In our current house, our mandir began in a spare bedroom, which it shared with a bed and nightstand; it was a short-lived setting due to the arrival of Rajkumar, our first child. That room became his and our idols were once again scattered or packed away. Two more children later, the novelty of a baby-proof house had disappeared and that wish for a sanctuary—for me and for my kids —still existed. Our full household, which includes my mother, precluded a mandir having an entire room to itself, so I cleared one wall in our office and put a palki or mandir structure on the floor. In the palki, I arranged my Ram Darbar murtis from India which I had been waiting to install.

It may have been premature, as the next day, a curious, vigorous shake by Rajkumar to the palki led to Ram’s bow and hand coming off. I was frustrated with myself (what should one expect of a 4-year-old boy?) and exasperated with the continued unfruitfulness of my efforts. So, I put the murtis on the office bookshelf, where they were surrounded by envelopes, printers, and ink cartridges. The arrangement could not look less elegant and every morning when trying to engage in some prayer ritual, I would instead find myself meditating on subjects such as “how to organize your home.”

Now, three years later, my mandir is still in the office, but returned to the palki on the floor, where it is safe again. Is it what I want? No. I would love to have a private, dedicated room devoted just to prayer—that would be luxurious … an area of true respite, with powerful vibrations.

On the other hand, why so much emphasis on architecture and home décor for a sanctuary setting? Is the respite-like nature of the home shrine wholly dependent on its physical makeup? My mandir’s moves within the home have shown me that a designated space—as a tool or prop—is all that is required. Once I have sat down and committed to pray, it should be solely an inward journey.

My mandir is certainly not vastu compliant, nor would it receive any architectural accolades … it doesn’t even particularly “wow” people when they see it. My simple mandir pushes me to focus on the purpose on establishing it in the first place and not creating a contrived devout atmosphere.  What an exercise in finding contentment and ego management. Perhaps that sanctuary is not as elusive after all.

Sonia Kumar lives in the Chicago suburbs with her husband, three children, and mother. She has a master’s degree in communication from DePaul University. 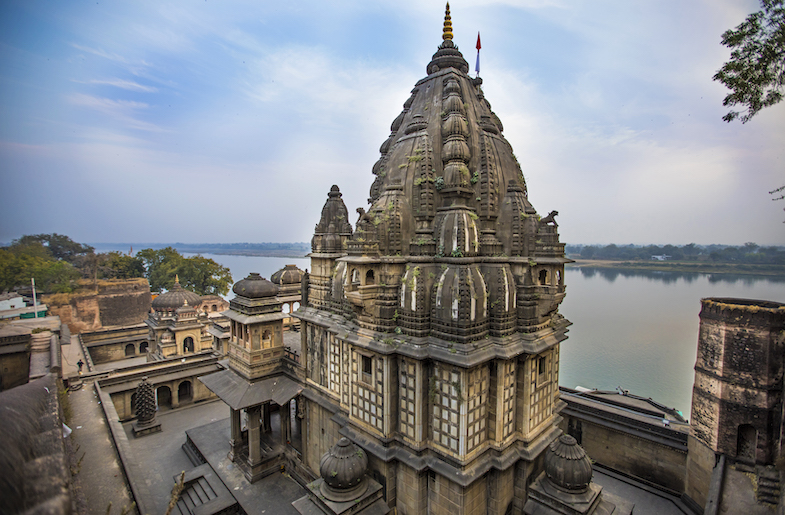